which OK is often something you could consider a feature, I guess, but my wife sort of needs Microsoft Office 2016, which we’ve otherwise been pretty happy with for years. However, she gets this error when she tries to install:

Similarly, trying to install anything from within the Windows app store meets with utter failure:

We were having problems with even installing Windows updates, but I was able to resolve that by running some command-line voodoo to clear some caches or something. It didn’t fix this issue, but it did get the system updates installed.

This is a new (refurb) laptop she just received in warranty exchange after an unfortunate beverage-keyboard-interface incident with the new laptop I bought her a year ago after an unfortunate beverage-keyboard-interface incident with her previous laptop. She did the Windows 11 upgrade almost immediately, I think in the hope that it might resolve the Office install issue.

All of her other (non-Microsoft) applications have installed Just Fine.

Her trial version of Office365 is running out soon so I need to figure this out. My Google Fu has not been strong enough. Suggestions?

Out of interest, and totally understand if it’s not something easily doable, but can you get Win11 in a Virtual Machine to connect correctly? If nobody can suggest something more in depth, then installing a lightweight Linux with Windows in VM would be a last-ditch workaround. (I’m a Mac guy, sorry!)

The scenario does make me wonder though, is there some sort of lock on that machine? Something similar to how on occasion when I worked for a phone company, sometimes someone would call with a replacement handset that was still IMEI blacklisted and so couldn’t use the network.

“I say we take off and nuke the site from orbit. It’s the only way to be sure.”

From the error message and the fact that it’s Office Pro, I’d guess the copy you have of Office is trying to contact the machine’s “corporate” authentication server.

Sorry, but I have no idea how to spoof that. I found articles of things to try… might be the same as what you’ve found. This one has a list, but most of the steps seem pretty basic: 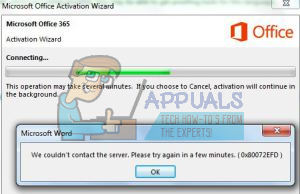 Error 0x80072EFD  is an Activation Error now seen in Office 365 and 2016 carried over from it's pre-predecessors, simply meaning that Office cannot be