Continuing the discussion from A thread for bacon:

A thread for bacon

A thread for bacon

People in LA also do this. Because depending on traffic and time of day a given trip can take 10 min or 30.

That’s why you stay the hell off the 405 no matter what time it is.

Yeah, right. I was talking about 10. I’m currently mapping out my route to Palm Springs for this October.

Yeah, right. I was talking about 10. I’m currently mapping out my route to Palm Springs for this October.

You east-west, I say north-south.

And 5, going through Los Padres can be… fun… at certain times. I swear, I was passed by a hill once.

My favorites are where you get in the same slow down, in the same place, for the same cop, for a week in a row.

I know you like pulling people over there buddy, but there is a curve in the highway and Indiana state law requires you get a lane of clearance next to you, and this spot is right after we go down to two lanes, so you surprise people with police lights going 75 on a curve after merging once and now merging again. And more than half the time there isn’t even a pulled over car with you anymore.

I know my traffic doesn’t compare to yours, but it’s all relative.

I feel your pain. Several similar scenarios around here lately.
Also, I get “safety” and understand that we have to compensate for idiots, but if the options are vacate the right lane or slow to 35 to pass a cop & customer/victim on the shoulder, it does not mean everyone has to slow to 35 across the whole damn intertstate AND evac the right lane or two or three. It would be better if the police got on their PA and tell the guy to exit the freeway and pull over where it isn’t going to hamstring the main road for 30+ minutes.

In Colorado, they are required to be out in the open, and be able to be seen for a certain distance in both directions. I believe that they can not be in an unmarked car, as well.

And then there’s the bridge between Vancouver WA and Portland OR, where the bridge operators flip on the warning light at random times (especially during heavy traffic times, just for kicks. Traffic backed up for a mile on either side of the bridge. And on both sides there’s an entrance ramp within 100 yards of the bridge, with more cars waiting. It’s like someone threw a bunch of traffic-stopping situations in a blender.

Or maybe the cop was thinking of getting on the expressway when he pulled someone over.

The thing about clearing the lane is people will shove into the other lane like there is a force field around the cop and they are going to die if they hit it. Ignoring the fact that if the trucker they just got in front of isn’t paying attention, they will die.

Well, I think that in certain states they are required to vacate the lane next to the cop.

The one I love, currently, is the cops who squawk their sirens here, in order to get through the intersection without waiting for the light. Once past the intersection, it becomes obvious they aren’t on the way to an incident. I keep waiting for the assholes get pasted by someone not paying attention (and there are a lot of those too.

I live between two rather heavy intersections (not as heavy as the Financial district, but still). Every time they squawk and run, I get a small dog trying to bury herself under the blankets.

Re: unmarked car…
I’ve never heard that they can’t use unmarked cars here, and I have seen unmarked cars with strobes in the windows pull people over. But the latest bit of underhandedness I have seen lately is a white car with ever-so-slightly off-white markings on the side only.
“We’re not in an unmarked car” nudge nudge wink wink
I work with cops, and have nothing against them in general, but when they’re tools for revenue generation, and it is blatantly obvious, then they’re taking on the roll of rat bastard.

I’m going by what I was told by a co-worker back in 2002. She could have been full of it, or things could have changed.

One of the streets I traveled a lot in Reno, there was a 50 mph zone near the airport. About two blocks down, it changed to 35. The 35 sign was near a corner of a side street, and the sign itself was obscured behind a tree. Yeah, we saw cop cars parked at the corner a lot.

I had a co-worker that was in the 55 mph zone, and a cop turned on his flashers. The co-worker was in the second lane, and couldn’t pull over right away. So… he came to a stop right next to the 35 sign.

@ClockWorkXon - Sorry, I didn’t mean to give the impression that I was contradicting or not believing you. I can totally see some places not using unmarked cars for traffic duty. Especially since it is kind of hard to defend the public safety angle if they’re not openly, visibly police cars. Public safety and deterrent are two of the arguments they use around here when defending against critics who say they’re just generating revenue when on traffic duty.

Public safety and deterrent are two of the arguments they use around here when defending against critics who say they’re just generating revenue when on traffic duty.

Which can easily be proven false by looking at the people arrested for warning people about traffic stops and speed traps. Technically the person out in front of the speed trap is extending the zone of compliance, therefore helping the police.

Well, I-10 just got a little more “interesting”.

Whoa, do I feel sorry for the poor guy in the pickup truck! Road engineers need to be paid more in order to get them out surveying more, spotting a bridge support that’s about to become undercut by a change in river course - even if it’s something happening really fast in a large flood - saves money and lives.

My tuppence on the police trap thing - here in Northumberland police are required to be visible (ie, not in an unmarked car, and wearing hi-viz vests) and the vehicle they’re using must have the “speed camera” default warning image adhered to the vehicle large enough to be seen from 300 yards (about 250 metres) ahead of the trap.

Whether or not any of the above happens is up to the officer setting up the trap. Fortunately our guys are only armed with notebooks and loud-hailers rather than automatic weapons…

Thankfully we haven’t quite reached the point where police are gunning down speeders… yet. The big guns are kept in the trunk.

OTOH, if someone wants to have their own personal jihad they have to show up with more than a couple knives and a cleaver, as was just demonstrated.

The people who designed the freeway system between Pacheco Pass and San Francisco should face a firing squad.

Here’s the way to design a freeway: line up cars eight across, and a mile long. Put in your exits, entrances, etc. Tell the drivers to start their engines, and then study how traffic moves.

And the insistence of putting HOV lanes all the way over in the left lane is stupid. To exit, you have to get over across umpteen lanes - in heavy traffic (which the HOV lanes were designed to reduce). Yeah, not happening.

And apparently CHP is now parking empty cruisers, with lights flashing, in construction zones. And drivers have already caught on.

If we’re lining people up against the wall ready for the firing squad, can I also line up everyone from Her Majesty’s Department of Transport who recently decided that we don’t need a review of the current road sign system, we should just keep the one that we’ve been using since the 1960s.

Except, it has major, major issues. Like… if you have a round sign with a red border with a picture of a lorry in it, it means “no lorries”, obviously. A round sign with a red border and a picture of a bus means “no busses”. So, what does a picture of a car mean? That’s right, “no motor vehicles of any type”. Consistency! Oh and a red car next to a black car means “no overtaking”, not “no vehicles unless they’re red”, or something. And a black car with shrapnel means “no vehicles of any type carrying explosive or inflammable materials”. Unless the same black car with slightly different shrapnel is in a red triangle because then it means “danger, look out for loose road chippings”.

Sigh. I was hoping that this review would at least decide that we should start using DIN for our roadsigns like most of the rest of Europe, because Transport Medium is particularly naff to the point that I’ve noticed a couple of councils sneakily starting to use either Motorway or Helvetica…

And we have a new finalist for the Darwin Awards. 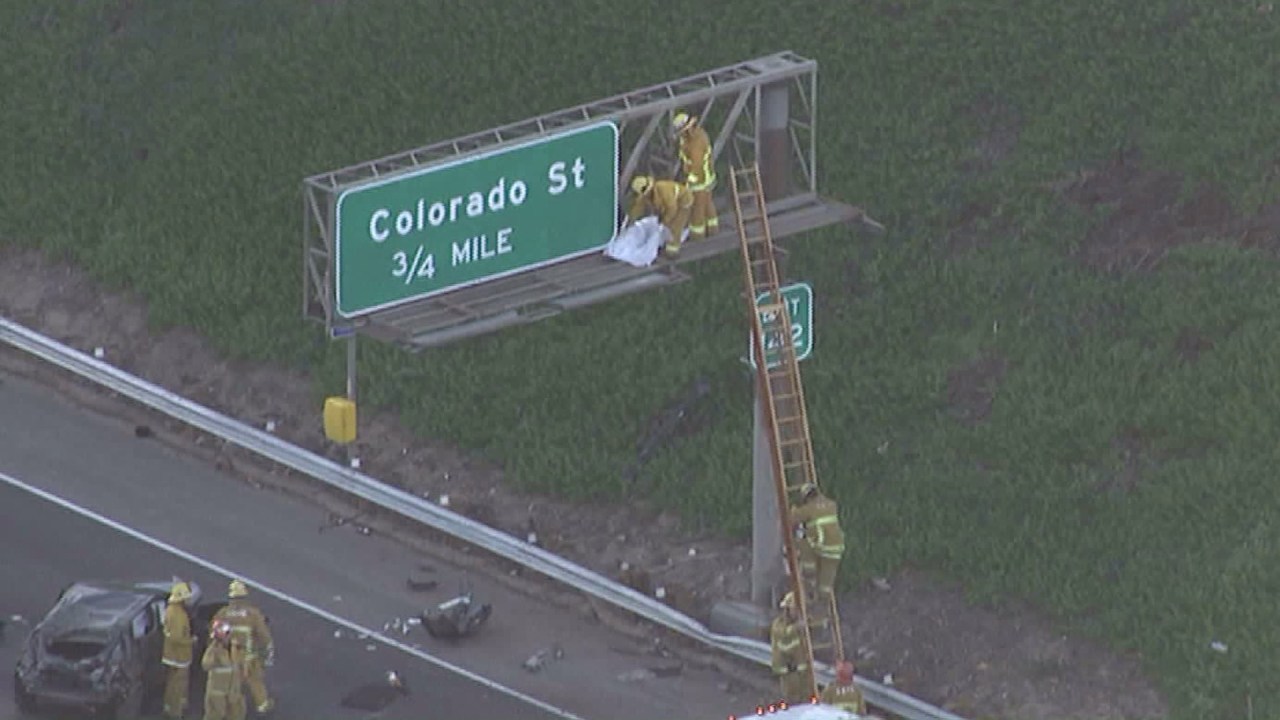 Driver Who Landed on 5 Freeway Sign After Fatal Crash Was Passing on...

Call me crass, but I wish there was good, high-def footage of the entire escapade, with hilariterrible slo-mo of his “launch”. And then play it on a loop at every DMV.

Call me crass, but I wish there was good, high-def footage of the entire escapade, with hilariterrible slo-mo of his “launch”. And then play it on a loop at every DMV.

Not crass at all. I made sure that my dashcam captured full 1080p 30fps with minimal artefacting from compression for this exact reason. If you’re going to record someone Darwinning themselves on the motorway, you want to do it right!

They’ve existed since 1934. Belisha Beacons stand blinking either side of the road, with their striped poles often illuminated for extra visibility. They’re generally placed in areas with good visibility, and high pedestrian foot-fall. When you, the pedestrian, step onto them, all traffic, except vehicles attending an emergency, is legally mandated to stop and let you cross. You can take as long as you like, since unlike a pelican crossing* they’re not on a timer, and as many people can cross in one go as it takes.

Apparently this is new information to some people, as I almost lost the back end of the car today to someone who seemed oblivious that I was stopping to let a mother and child cross the road. Of course, this made him angry enough to repeatedly sound his horn, which startled the child, and was completely uncalled for.

So I, a culturally well-adjusted gentleman of the road, decided to do 20mph for the next couple of blocks just to hold him up more. Drivers that impatient need taking off the road before they kill someone. If I’d not been in front of him, he’d probably have ploughed straight into that mother and child and killed them, since he obviously wasn’t doing less than 30 to begin with.

*- pelican crossings are guarded by traffic lights. You generally have 10 to 20 seconds to cross. They’re being phased out and replaced by puffin crossings, which use radar to measure traffic flow in order to pick a convenient time to change to disrupt the least traffic, and IR scanners to detect when you enter and leave the crossing so as to only release the traffic when the crossing is clear.