Well, I couldn’t find a topic like this, so I’m starting one.

As I go through my house and update things, I find that there are some things I just don’t know enough about to even start researching them. This month’s project - a sound bar.

Right now I have a big receiver and a crapload of bulky speakers. With a subwoofer. I think it’s 7.1. I have a projector and a Roku as well. Clearly the Roku plugs into the receiver and then the audio goes out the speakers and the video gets routed through the projector. All with wires. And I hate it.

I’m working on painting my interior and while I’m not quite to that portion of the main room, I figured I ought to start looking into soundbars. I’d like something wireless, maybe Bluetooth. Need to see what my projector supports. Pretty sure I can plug my Roku directly into my projector as input rather than route through a secondary receiver. What I do know is that I’m tired of eight million wires running through my living room and all these speakers on my floor.

I am capable of wall mounting pretty much anything.

Anyone know anything about these? Or any other recommendations? Thanks.

I wish. It’s a great big two story room. And also I plan to move in a year. My next house will definitely be in wall. But here I’m just working on putting lipstick on the pig.

Gotcha. You could still do Panduit if you want something that is removable but let’s you keep things looking nicer when running from a wall-mount TV to an entertainment stand. It can just be taped to the wall.

Ideally don’t run power and data in the same conduit or even parallel though.

I don’t have a recommendation, but I hate the Boston soundbar that I bought. If I don’t listen to my music loud enough, it shuts off, the subwoofer never worked, and when I contacted the company (twice) they never contacted me back.

Klipsch is reasonably priced and tend to sound great. My 5.1 setup at home is all Klipsch speakers. 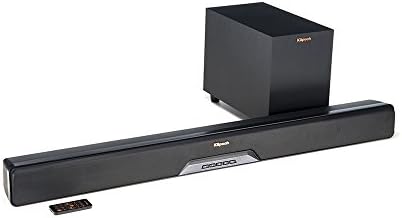 My brother pointed out my abundance of living room speakers recently over on Facebook… and he’s not wrong. I have 4 elderly speakers adjacent to the TV stand, and they’re never on. Our normal TV is loud enough that we just use that all the time, despite having an old but strong stereo attached.

I have considered using the speakers if we move and I have a dedicated office, but I’m holding on to a 90s set and some my dad got in the 70s that are probably nonfunctional due to age.

The TV build-in sound is good enough for me, especially so I don’t annoy the neighbors.

Try them out in the store, and don’t be afraid to crank them up to make sure they actually get loud. I was quite disappointed with the lack of volume from the sound bar I bought, but it was from Walmart and they didn’t have any demo models at all. If I ever buy another one, it will be at Best Buy or Fry’s so I can try a few and compare.
Also, I was dissatisfied with the HDMI ARC connection. (Audio Return Channel) There was a noticeable lag in the sound, so it was out of sync with the video. (It really bothered me, but the wife didn’t mind as much, I think because on some of the Spanish language channels, the audio is always out of sync.) So, I ended up not using that feature, and wished I had bought the slightly cheaper one that didn’t have it.
Between those two issues, if we’re watching a movie or anything that we want to hear louder that the TV speakers will go without sounding like crap (they’re truly horrible), I turn on the receiver with all the surround speakers.

I don’t recall seeing any decent sound bars that didn’t have a subwoofer, so you’re probably still going to have another box to put somewhere, but at least it can be tucked away out of view.

EDIT: My buddy has an LG and it is fantastic. As I recall, mine is a Philips, which I got so I could be sure it would talk to the Philips TV properly.

Now that we are moved, I need to upgrade the computers in this joint. I need three of them, with accessories. The boys like to play games, but it’s mainly Roblox and Minecraft and Fortnite stuff right now, but I can see them getting more into things as they get older. I play some games, nothing too intense, but my bff keeps nagging me to get a WoW account so I can play with her. All my stuff is wicked old. The boys’ stuff will be hardwired into the internet but mine needs to be wireless. Also, I don’t want to take out a second mortgage but I know it won’t be cheap. I figured this would be the exact right place to ask for recommendations

I’ve buil t two machines from their site. I also used it to upgrade my last machine.

I’m not sure whether it’ll be helpful or not, but I’ll share how I buy PCs (and try to relate it to your situation).

I buy a new PC every 4 years or so. The specs are:

As to your situation, if you are intending to replace the PCs at regular intervals as I do, you could adopt a similar strategy to me.
If you don’t want to replace your PCs quite so regularly (and I can completely understand not wanting to do that), then you can probably stretch out their lifespan to about 10-12 years. At that point you will still be able to run things like MS Office, but games will be very creaky. You can improve the games performance by replacing the graphics card half way through (I’ve done that a couple of times). That’s a much cheaper option than replacing the whole PC.

So as I said, I’m not sure how helpful that is - especially since it’s more general stuff and nothing specific

You might get the most mileage out of merging these two stratageries.

I just got an i7 laptop with pretty decent specs for $200 on Kijiji. I plug that into the tv for a monitor and use a wireless mouse and keyboard from across the room. It does everything I ask of it aside from graphics-heavy games. You still have to contend with onboard graphics for the most part.
I find laptops to be much cheaper than the build-a-box machines. I load them up with as much aftermarket RAM as they can take and they’ll last quite a while. Plus, easy portability.
I change the power options to keep running if the lid is closed and it works like a tiny little computing station that can sit quietly in a corner, out of the way.
Since you don’t care about the screen size, you can find some pretty good deals on a lappy with a smaller screen. Smaller size doesn’t necessarily mean smaller power.