Interesting to note that there’s no news of any xenophobia attacks on your side.

Things have calmed down somewhat, but feathers are still ruffled.

Most of us think these attacks are just excuses for looting to get free stuff.

Turns out if I actually look I can find something. 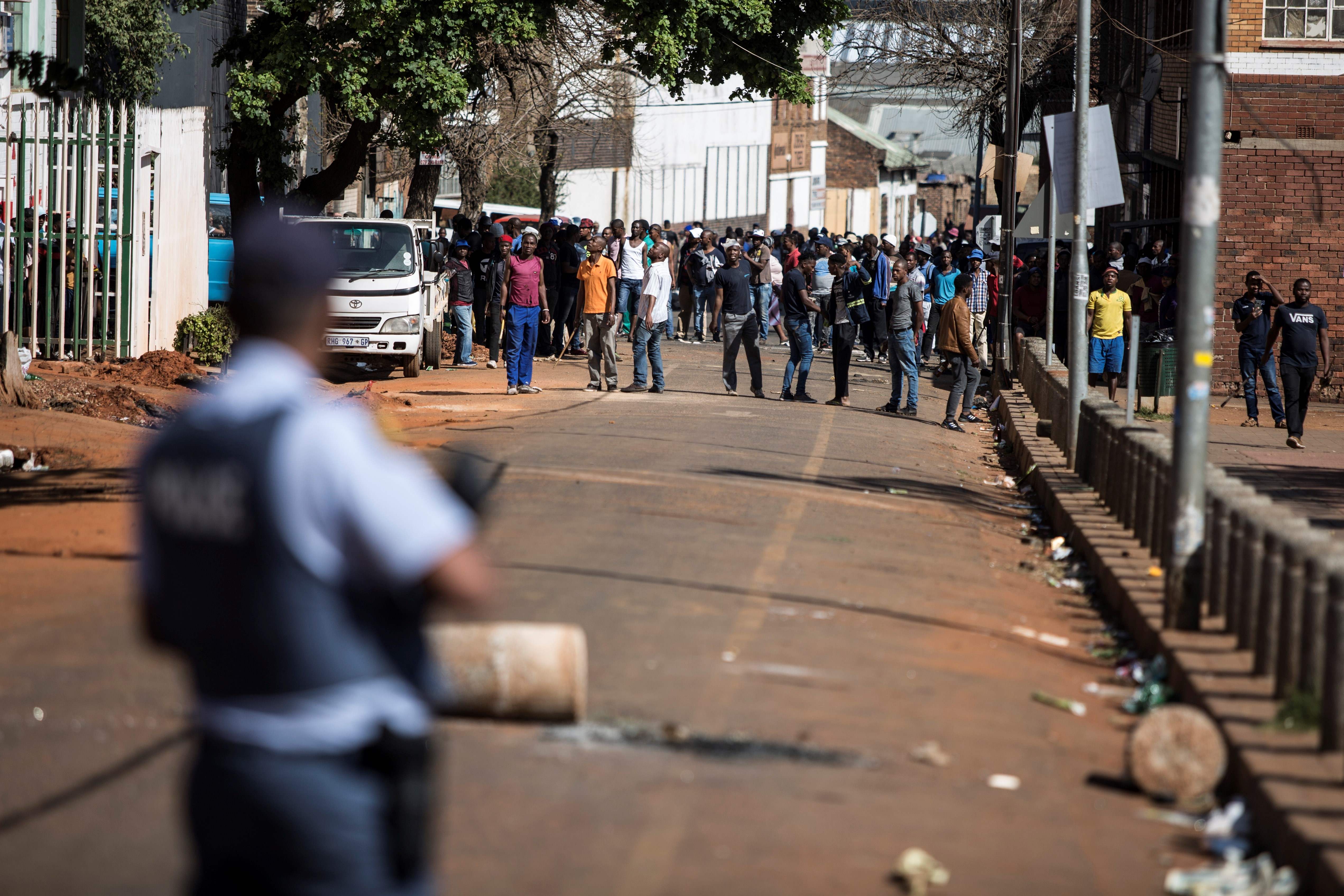 I’ve been reading a bit about in on Al Jazeera’s website.

And yay, xenophobia is alive again… (this was yesterday)

A group of people, some of them armed with sticks and pangas, marched and vandalised property in the Johannesburg city centre, the city's metro police confirmed.

Protesters from various hostels in eastern Johannesburg have begun marching along Jules Street. Carrying weapons, including knobkerries, the men sang, "foreigners must go back to where they came from". https://t.co/SKbWqGePdz

Think I’ll start a thread up, this level of nonsense deserves its own thread.

I don’t usually post about politics because I hate politicians and how they seem to be screwing over the average citizen and destroying the social norms that make up our society.

However, our current (AU) government is in a bit of trouble at the moment. (It has a 1 seat majority, so is holding onto power by the slimmest of margins. They’ve also destroyed our economy, Universities and housing market over the past decade. The opposition aren’t any better.)

And now, a Chinese-born politician (who won her seat by a tiny margin of something like 2000 votes) has been revealed as having close ties to the Chinese Communist Party, rather dubious business connections, and allegedly lied when she stood for selection.)

Andrew Bolt is a right-wing nutjob that I detest with almost every fibre of my being. But when he does something like this, I have to agree with him:

A bit more info, for background:

Legitimate and important questions have been raised about Member for Chisholm Gladys Liu. As for the Government playing the race card, this was both wrong and foolish.

And you Americans thought the Russians were bad. At least they don’t own half your country.

I’m not so.sure about that. There are small news stories about Chinese infiltration here and there. And if you look for them there are stories about the tons of money being funneled into American Universities, to create cultural understanding. There also seem to be a lot of supposedly US research projects at universities that have Chinese Nationals on them.

Pelosi had a Chinese spy as a driver for years if I recall correctly. I’ll have to double check who it was, getting duck to school soon.

Berkeley Breathed sums things up ever so nicely once again:

There also seem to be a lot of supposedly US research projects at universities that have Chinese Nationals on them.

Oh, it is rampant. In the past couple of years, the overseeing entities started investigating the gross misappropriation of intellectual property, but only because they got reprimanded for their inaction; they had turned a blind eye for far too long. There were a few stories about it in the newspaper, but much more that isn’t as widely known. Let’s just say that there is a disturbing amount of US funded research data/results that has been funneled to China.

And if you thought our government was pressuring our manufacturers to add in back doors. Think what China does.

And in Africa… Zambia in particular.

China informed the Zambian govt that they’ll build a freeway from the copper belt to Maputo (in Mozambique) in exchange for free copper.

So what the political w@nkers does not realize is that construction on the freeway is going slowly, and in the meantime the mines are being mined like crazy.

I know because we supplied a system to the one toll plaza, and it haven’t been activated yet.

Also we see long distance articulated trucks carrying heavy loads of copper on our roads to Durban. (edited to add) On a regular, almost daily schedule.

So the Chinese most probably is trying for world domination the Pinky and Brain way.

Edit2 : Rest of Africa is the same. Chinese will grant loans and take over that way.

Elections Tuesday were for Town Council positions only. So, of course everyone in the area had to complain and whine about it. “I go into town to spend money, I should get a chance to vote for who runs the town.”

The election went the way the out-of-towners and the good ole boys wanted it to and the blood dancing was pretty bad. Yet the complaining about the lack of representation in a town where they don’t pay taxes continued. My friend lost her election by a large margin to a local police officer that was caught on video tape choking someone outside of his wife’s bar.

The election was painted as a fight between good old boy networks and the people who want the best for the town. Also between PC culture and conservatives. The interesting thing is that it’s the two republican women that are painted as the PC good old boys… and the local Democrat old men who are the town loving conservatives.

And it worked. It was a total sweep. The one person that I approve of is left on the town council and she only stayed on because she wasn’t up for election. I’m concerned for my town and what will happen in the future. The town manager is on the chopping block, along with the water services manager, a couple of the street guys, and if they go they lose half the office staff.

Today’s politicians only look after themselves and their cronies. Everything else is secondary, and can be conveniently blamed on somebody else.

In this particular case since I know the individuals involved it’s a bit clearer than that. Unless I’m a crony.

The comments last week about the President working against or around US foreign policy show something important.

PUSA creates foreign policy. Foreign Policy does not exist in and of itself. After two years of telling us there is no Deep State, now we are being told that not only is there one, but it’s opinion is more important than the person voted for to set policy.

Defying Trump because you think he is wrong and slow-walking or ignoring directives isn’t patriotism, it’s weakening the fabric of our government. This implies that the government is actually run by people that no one voted for, that your vote doesn’t really accomplish anything since the individuals actually running the government will do what they want regardless.

A lot of the ruckus around Trump is him firing people who won’t do what they are supposed to do. The media outrage at an executive determining who his staff are and letting them go for non-performance, or flapping their gums about stuff is almost funny if it wasn’t for the fact that so many of the press are married to these people.

Defying Trump because you think he is wrong

But defying Trump because he is breaking the law is actually required.

Again, firing people because they refuse to break the law is a problem. I don’t care about most of his firings, but some of them certainly have been problematic.

But defying Trump because he is breaking the law is actually required .

Not one actual piece of proof has been offered. Multiple people have said that someone else told them the conversation made them uncomfortable.

Just because Biden is running for president doesn’t mean that his relatives can’t be investigated. This seems to be indicating that if you run for office you and your family are immune to investigation, or there is a higher bar set. When Biden himself is on tape admitting he got the prosecuting lawyer fired I think there is a case to be made.

If an American citizen traded in on his families political influence to get a position at a one of the largest oil companies in a country we’re sort of supporting in a proxy war against Russia I don’t care if he uses quid pro quo or not, that’s something we should know about.

Let's get real: Democrats were first to enlist Ukraine in US elections

Since at least 2016, Democrats repeatedly have exerted pressure on Ukraine, a key U.S. ally for buffering Russia, to meddle in U.S. politics and elections.

Well, yes, in conjunction with other people (including the co-equal branches of government).

Congress is in charge of approving ambassadors and treaties as well as declaring war. Everything else is pretty much the President, a following power to appointing ambassadors is the ability to tell them what to do and how to treat other countries.

This is how the US entered the Paris agreement, Obama did that on his own. It’s not a treaty, so Congress didn’t have anything to do with it. On the flip side, that means Trump is able to leave it by signing a piece of paper.

Except that’s not what happened. Ukraine wasn’t even aware there was a delay, and they didn’t take any action before the aid showed up. There was a delay period while the new president was vetted and some experts consulted. The President didn’t mention holding the payments back, and the people interviewed so far haven’t said he said that either. They all seem to feel like maybe there was something going on based on what someone else told them. I’d almost guarantee there have been dozens of conversations per year with almost every president in the last 80 years.

One interesting thing coming out here is exactly how many political families had children working for foreign oil companies. And I’ve read a few other things about profit taking like this from all over the place.

Once again though, there is enough noise for everyone to pick their own truth and let what they don’t like fall away. I know I’m doing it, and there are a couple things that are concerning, but the side pushing impeachment seems to not care what they get him on as long as they get him on something. And it’s been like that since the day after the election.

Defying Trump because you think he is wrong

Had the same with Zuma here. Everything that lead up to State Capture was wrong, and most of us said so.

But this only applies to democrats running for office or in positions of power.

Dismissing zealots on both sides, this is generally the point of view from the left. I am reminded of the people in the hood that literally stopped paying their bills after Obama was elected. Rent, power/gas, phone - they were convinced that their false messiah was going to take care of everything for them.

Not one actual piece of proof has been offered. Multiple people have said that someone else told them the conversation made them uncomfortable.

There’s a lot more evidence appearing all the time. I suspect that there are a lot of people who will never admit that Trump did anything wrong despite how much evidence is produced. That includes all the republican senators, unless public opinion sways a bit further away from Trump. Time will tell.

See, I disagree there.
If he is qualified for the job he is hired to do and the company trades on his name then that’s up to the company. That’s not corruption. It’s also extremely obvious that it’s happening. It’s no different to any former president going on speaking tours - they are trading on their name and good on them for doing so.

Except that’s not what happened. Ukraine wasn’t even aware there was a delay

The more the hearings go on, the more that narrative seems to be false. Again, time will tell, but it’s really not looking good for Trump from this side of the world.