Mom, I bet you can't

So DS turns 11 at the end of January. He decided that he wants a Minecraft themed party this year with ALL his cousins. So right off the bat, I have to get planning. SC is against large birthday parties. He thinks they are too much and give kid’s a big head. Our last large party was for his 9th birthday and had a guest list of 55. He’s older now and my family tends to procreate a lot! So this upcoming party we are looking at an invited list of 70 (ok he’s also inviting more friends too!). So the kiddo and I are planning the decorations and activities and all the other asinine details that have to be thought about. “Mom, I’d really like a big Creeper but I don’t think you can do it.” “Excuse me? Do you know who you are talking too??” “No, really I bet you can’t do one. It would be hard.” “You want a dang Creeper. You’ll have a dang Creeper! I KNOW I can pull that off. EASY!!”

Well I pulled it off. It wasn’t easy, just exceedingly time consuming…

Now he wants a pig

(Cause I have the time!!) January 3rd can not get here soon enough!!

What was the craziest thing you’ve done for your kid? Cause I’m pretty sure this Creeper is in my top 10!

I’m definitely not that cool. Or crazy. But there’s still time!

That’s awesome, did you use the original art file and expand it? That’s how I did my daughter’s Steve head and sword for Halloween last year.

And did you fill it with tannerite for the grand finale?

Gosh, I wish I thought of that!!

Nope, I cut and hand laid the 2 inch squares in the 4 colors of construction paper. The eyes and mouth were added once the face had “skin”. It was a process but totally worth it! The kiddo is ecstatic with the outcome. He cannot wait until the party to show him off!

The Grand Finale is the EnderDragon Pinata that is getting started this week. Thankfully, my mom volunteered to take THAT job on!

BTW- Any suggestions on what the EnderDragon should drop? I was thinking like Green bouncy balls (Like experience) but I was shot down.

Bouncy balls do make the most sense. Maybe green Easter eggs with candy in them?

And yeah, the designs all scale up really well. Since it’s all squares as long as you are keeping the ratio the same it prints out very well. I can’t imagine doing it the way you did, that’s awesome. But, I’m not very good at that sort of thing, so instead of trying to figure it out, I looked it up.

The swords and pickaxes are the same way, maybe you can make your pinata sticks minecraft swords. Also, there is something cool about carrying around a minecraft porkchop.

Green Easter Eggs are ordered!! That is a fantastic idea!! THANK YOU!!

Any other genius ideas you want to share Woodman?

Never get involved in a land war in Asia.

You making a square cake decorated like the one in the game? Also, depending on budget, they now sell minecraft torches at Target. But you could do the same thing with a 8.5 x 11 piece of paper folded into a square around a flashlight or maybe even a chemlight.

Or for extra crazy credit. Do the windows. 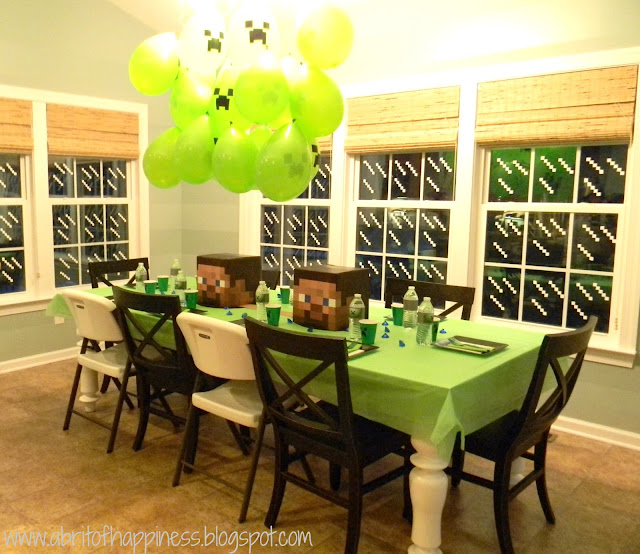 I already have Window clings for the sliding glass door at the house. It’s mainly an outside party. There will be a Swordmaking area. They get to color a blank cardboard sword to keep. There will be a swordfighting “arena” to test their swords. A Build area (making dirt blocks from 12x12 boxes for them to build with). A “picture” area, with The Creeper, and any other guys I can get done before the 3rd. We also have a big swing set for the kids. The tables will be mostly Minecraft greens and brown and I have paper grass runners to go down the middle. I’m 100% sure on food choice or cake design yet. I know that the kiddo wants cake AND creeper cake pops. But I can easily do both, considering the party size. I will NOT be doing party bags, just whatever is in the Pinata. The kids received Custom stickers I made inside the invites.

I really dig your big Creeper.

My son had a Minecraft themed party on his birthday almost 2 years ago when he turned 12. We made some Creeper shirts for the kids. Just some plain green t-shirts, black fabric spay paint and a homemade stencil. The block patterns also made the Creeper cake pretty easy as well.

That is a great idea! Anything other ideas/ advice that you have Road_Rash? I’m down to 3 weeks and Christmas and New Year’s is thrown in there!!

First of all welcome back.

Second of all, I can’t believe SC hasn’t peed on it yet.

Third of all tell SC to get his happy ass in here.

Hello Force!! SC can’t peed on it yet! Maybe after I contract someone to modge podge the sucker!

I’ve tried to SC to come in here. He’s an ass. I’ll tell him you asked after him!

Parenthood is awesome! He’s the biggest pain in the ass but he’s OUR pain in the ass! You get to the point where you only like your kid and no one else.

You get to the point where you only like your kid and no one else.

Other people’s kids are fucking heathens.

It was a process but totally worth it!

Mom, I bet you can’t make two dozen cream cheese cookies and mail them to me.

Other people’s kids are fucking heathens.

Think of them as “children of the human race”. They become a little less annoying, but I give a shit more.

If I do that then I just get angrier. My 17 year old has friends that regularly steal their parents credit cards and buy stuff, then lie about it when caught. And the parents don’t call them on it. Like they forgot about the $150 they spent at Victoria’s Secret, and their daughter just found a few bras and panties laying around in an alley.

A friend of mine had this conversation with her 7th grade daughter when she had a boy over for the first time.

When she sent the older kid up to check they closed the door on her daughter, so she went upstairs to her home office and opened the door on the way and the Brat texted her to get out and stop creeping on her. And she went back downstairs!

My daughter was like, my parents would have been halfway back to my boyfriends house by now. And the older sister of Brat was telling her mom she would have been screaming at her to get the hell downstairs right now. She said she didn’t want to deal with it and she was tired and scared that she would hurt her.

These are the successful kids my daughter knows, straight A students, popular group, in all the right groups. And they treat their parents like dog crap. My daughter is a straight A- student and will go miles farther in the real world, because she at least knows what the real world looks like.

The slacker kids end up bouncing from house to house living with friends and going back home for a week or two until they screw up again and get grounded and just leave again.

Anyway @Zesstra, your party is going to be a blast. And that’s an awesome pig.