Good luck! I feel like furniture/homegoods places are either insanely quick (Ikea for example, if they have something you need at a local store) or extremely slow (“Let us go cut the trees down to make the wood we need for your furniture” slow).

If we move, I’d really like to try one of the projects I’ve seen online for either a dining table or gaming table. Maybe one of the ones where you assemble something out of wood with clean-cut edges but damaged face, and fill with resin and sand down to make it pretty.

If we don’t go to my parents’ house for Thanksgiving, then we will be hosting, and will be using one of these. (I already have one for camping, so after the hunting trip, I made sure it is easily accessible.)

Luckily I still have the old table, though only a couple chairs, and the kitchen has the island we can put everything on. Just was hoping to have everything in place so they could see the finished product as they only come down once a year, and so probably won’t be back until after we move. Oh well.

We need to figure out if we need to get more chairs for Thanksgiving. Thanks for the reminder.

Are we playing musical chairs and tables now?

5 posts were split to a new topic: Happy Famdamilies

But back to the original thread…

A while ago my work told me that they’ll be happy to assist me with a bit of money financially in order to get us started on our house.

if not, then we’ll have to do it bit by bit. Ittybittywise we’ll get there. Rome wasn’t built in one day anyway.

My unexpected project - fix the toilet in the guest bathroom. Should have been a five minute fix, but nooooo…
On Sunday, step-son is over and asks why the water is off in the guest bathroom. It isn’t. WTF?
Sink and tub are ok, but toilet tank isn’t filling. Look down at the shutoff valve - handle is missing. WTF?
Fill valve in the tank is somehow stuck closed. Shouldn’t be a big deal, but it is one of Korky’s new quiet fill style. I installed it a while back (maybe a few years ago?), but have never jacked with one to see how it works. I pop the cap off and poke at it, and get it to fill, but it doesn’t want to stay on, nor cycle on/off properly with the cap back on. Frick. I decide to just replace the valve assy with the traditional fluidmaster style. On Monday, I pickup a new toilet valve and shutoff valve on the way home from work, after going cross-eyed looking at all the variations of shutoff valve. Get home, open the bag, shutoff valve is for compression fitting coming out of the wall, not threaded. FRICK! I didn’t check the actual valve after grabbing one out of the box. Rookie mistake. Ok, unscrew the handle and check it - D shaped drive, not splines like I need. Ugh, yet another disappointment. I’ll have to return it. Ordered a new handle from Amazon (because Lowe’s didn’t have one), and will jack with the toilet after it arrives. I could have tried pulling a handle off another valve, but didn’t want to press my luck.

Flushmaster universal valve (which the toilets came with):

On the bright side, I found a helpful video on the Korky site, and the filter in the quick fill valve, which is part of the inner valve, may have a buildup of mineral deposits from the hard water, causing it to stick shut. So, when the handle comes in, I’ll try cleaning that, and if that doesn’t help, I’ll replace it, since I have a new valve assembly ready to go in.

Throwing in a tidbit from my experiences:

I’ve buying Fluidmaster brands parts for years, but I opted for a dual-flush (half flow for liquids, full for solids) the last time. It was finicky to adjust, and failed much faster than the previous parts. It almost seemed like they had rushed the dual-flush to market. I ended up getting two, plus parts… all at their expense save the first one I had bought. 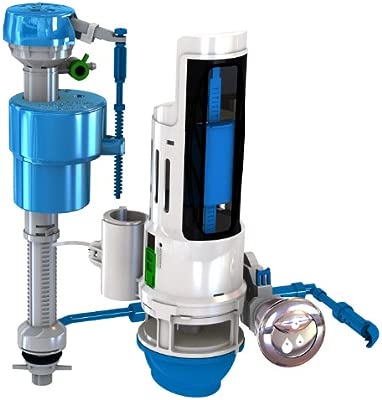 Easier to install, easier to adjust, running more than three times as long as the FM one did. I have had two occasions where the water would trickle out… like you’d have to “jiggle the handle” to fix on a traditional ball float.
It was dirt or lime scale or something on the valve seat. I turned off the water, disconnected the valve body with a quarter turn, wiped my fingertip across the silicone seat, and reseated the valve. Boom Done.

Strongly suggest these as a replacement for toilet tanks.

@RoadRunner - we had some serious rains this side, so all site activites was suspended as the TLB would’ve got stuck anyway.

Want to give it a couple of days for the water to finish soaking in and things drying out a bit before we proceed.

Semi-random question, but I didn’t know where would be better to put it…
If you cut up a tarp, will it fray real bad? Anyone have any experience? I know they’re always folded and sewn around the edges, but dunno if that is for strength - give the grommets more to grab onto.
Reason: It will likely be raining tomorrow when we go on a hayride to look at lights. I don’t want to walk around for the rest of the night with a wet rear end. First thing I though of was the possibility of cutting some pieces out of a cheap Harbor Freight tarp. And as I typed that, I realized that a trash bag might be just as good an idea.

It will eventually fray, but it won’t right away.

Put strong tape on it (both sides), then cut through the tape. This will give you a good edge that will not fray. For a while.

After cutting take a lighter to the part you just cut and heat it for a few seconds along the whole cut side. That will stop it from fraying for longer.

If I never replace another drain and faucet combo it’ll be too soon.

I have enough of the tools tht if it goes decently it’s almost relaxing.

Thanks, good idea. I was crunched for time when we were leaving, and just grabbed a couple of plastic kitchen trash bags, which worked well enough. Stuffed them in the wife’s purse.

I want to be excited about working on the punch list. I really do. But I am so over this house and all its problems. I have a page and a half list of little things and I just can’t get my brain around doing them. Ugh.

I know that feeling.

Maybe it is time to call it quits for a while, then tackle things again?