Do you have the OneLink dock? It supports up to 3 monitors. 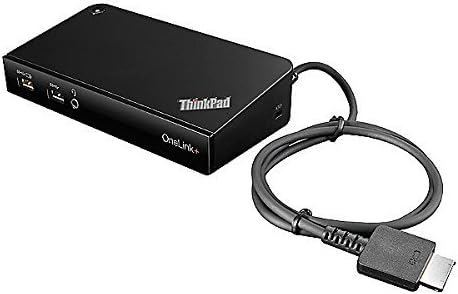 The ThinkPad OneLink+ Dock, powered by Lenovo’s revolutionary OneLink+ technology transforms your new ThinkPad into a full featured machine in the office or at home. Not only does the new convenient O ...

I… do. In fact, I just noticed it has a model marked on the front. I thought it was all but anonymous.

I think i need to scare up a DP->??? Adapter. When I figure out which one I need… Might even have one in the Spares box at home!

I currently have a spare monitor on my desk attached to a jump box… Which has no keyboard, so monitor is kind of useless. Figure I’ll try hooking the monitor up.

So, I guess it isn’t really only for Select ThinkPad Models

Well, only certain models use that specific proprietary-ish dock connector. It’s not terrible,a s it means one cable to connect power, ethernet, USB (7?), audio, VGA, and a couple DP.

The connector is not a standard I’m used to. It’s also got some issue, as I get a weird visual glitch at least 3 times a week where there’s a sort of ‘halo’ of dots around objects on screen I fix by reconnecting the connector. Other than that it’s fine.