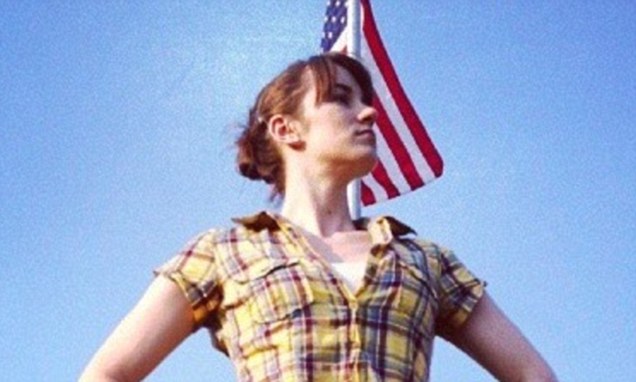 Female officer on how service in Afghanistan took an emotional toll

Before service in Afghanistan Lauren Kay Johnson, a lieutenant in the U.S. Air Force, said she was a fun-loving woman who would organize karaoke nights.

My dad forwarded this to me—apparently it’s making the facebook rounds right now and the guys from 2-502 INF are ripping it to shreds as only infantry soldiers can (i.e., with lots of fuck-words).

Her nine month deployment (half as long as the Army wartime deployments that my brother and the rest of 2-502 dealt with) apparently didn’t even involve combat; the article says “’[L]ong hours’, ‘drab meals of dry meat and soggy vegetables’ and constant ‘paranoia’ that something could happen at any moment, gradually took a toll on her mental state during deployment.”

Additionally, “Limited internet and phone service added to her feelings of vulnerability as did the fact she was a woman in predominantly a man’s world…The the pretty brunette said that sexual assault a constant worry for her on the front line, because she ‘knew the stories’ and ‘overheard vulgar talk.’”

Just…ugh. Everyone experiences stress differently, and the worst amount of stress you’ve experienced is the worst you’ve experienced, regardless of how it compares to someone else’s worst amount of stress—it’s not like you can objectively evaluate your gut feelings when they’re giving you nightmares. So, I mean, I understand that people freak out over the problems that they have, regardless of where those problems fit in the grand scheme of things on the “how bad really is your problem” continuum.

But, I mean, come on. Just…come on. Nine month deployments? Bad food? Spotty Internet? Because I know the stuff that the infantry guys were freaking out about during their deployments, and each one of those things would have been an improvement over what the 11Bs I know had to deal with.

Also, she has a blog, but I’m not sure I can muster the energy to read it.

This is what happens when we stop selecting for and encouraging mental toughness.

Stress, bad food, ‘paranoia’ that something could happen at any moment, limited internet & phone access…
Sounds like my high school experience. Thinking further, add in the long hours and it sounds like college, too, except that I didn’t really get picked on in college.

I glanced at her Blog, she’s a veteran violence concern troll. Blech.

I’m not going to dis her experience, but she should have some self awareness and hear how she sounds.

If someone is anti-violence, then surely the army is the wrong place for them?
This isn’t to say that everyone in the army is a violent thug, but the purpose of the army is either to defend the country or to attack another country - both of which are inherently violent. So to say that you have concerns about violence when you are in the army just seems a little … odd.

The platoon sergeant of my unit’s mortar platoon was a conscientious objector. If we got activated, he went to jail, leaving his platoon with no leader.

Made no damn sense to me at all.

Yeah, that’d be tough to do… mentally train to hurt/ maim/ kill/ destroy, knowing you wouldn’t.

Maybe I’m too honest - I couldn’t do a good job in those circumstances.

Am I the only one who finds it absurd that she was concerned about sexual assault because she was in a “predominantly male world”? If she had these fears why didn’t she think twice before joining the service?

Also, she wasn’t going to club med, this was a military action. She should be darn lucky that she had food. Troops in WWII sometimes had supplies cut off and had to make due with what they could. GAH!!! It irritates me that some whiny girl is getting attention when there are men and women who did their duty and served with honor and pride who are getting none. This girl deserves nothing!

His troops really didn’t like him. If they went to war, he abandoned them.

And yeah, this girl needed to put her big girl panties on and soldier on. Hell, we sexually harassed each other all the time. And we were all men.

Hell, we sexually harassed each other all the time. And we were all men.

Soldiers will do it all the time… Heck, in Spike Milligan’s memoirs sexual harassment was nothing new.