So we have this cartoon today :

I give the Islamic Republic of Afghanistan less than 10 days.

My experience is of limited use; it was 16 years ago and I was a very junior soldier who rarely knew even what operation I was part of at any given time, let alone how it fit into our operational picture or our strategy.

But if they have given up Kandahar, Kabul is not far behind.

This is a rough thing to watch, even if I thought I’d given up hope ten years ago.

Based on posts in Reddit, the Afghan army’s running away.

r/PublicFreakout - Traffic jam as people rush to the Kabul Airport in... 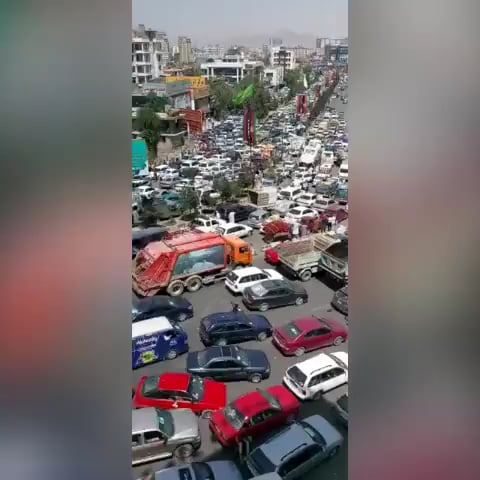 I give the Islamic Republic of Afghanistan less than 10 days.

Welp, this was wildly optimistic.

It happened quicker and sooner than everybody expected. Like the Spanish Inquisition.

I pity the women, girls and children who got left behind.

I think we should move the Afghanistan discussion over to a new message because as Jeff Foxworthy once said, the only way to describe it is with the word “cluster” in it.

I was literally at the center of this chat and did not do that because I am also not very aware.

I re-watched War Machine on Netflix yesterday night. It’s always been more cringe than funny for me, mostly because it was more insightful than comedic. “We did all of the winning we were ever going to do here in the first six months. Now we’re just making a mess.”

Meanwhile, America rediscovers (yet again) that we have been in Afghanistan since 2001.

I thought I’d given up hope like 10 years ago, but it still hurts to watch it all turn to ashes.

Apparently we are going to be bombing all the crap we didn’t already get out. Plus the lend lease stuff I guess.

I still don’t get why everyone was so against Trump doing this but Biden does it even more haphazardly and its ok. When obviously it isn’t ok.

In Kabul they are destroying documents and American flags and other symbols ahead of time privately before they are overrun.

I still don’t get why everyone was so against Trump doing this but Biden does it even more haphazardly and its ok. When obviously it isn’t ok.

I don’t know of anyone who thinks this is okay. I am mystified that some people thought it wouldn’t happen this way. The only reason it didn’t happen much sooner is because no one wanted to be the one to own it.

It is so frustrating watching the US do this generation after generation to countries. We go in and say we’ll make it all better and eventually we just bail.

Vietnamese, Kurds, Cubans, Ukraine, Afghans, Hong Kong… Last time we almost toed the line for an ally like that was Korea, and I’m sure everyone in South Korea is worth it.

I don’t know if there was a great way to end this, but rushing troops in to protect troops we are withdrawing seems to be a reactive way to go about this. I also think maybe we should have done this 15 years ago. Hit hard, push the Taliban back, then let the country try to pull itself together. Though it really seems like it’s been the Taliban and it’s like running the country for centuries, just different tribes.

Why did the US send troops in to Afghanistan?

In hindsight, maybe that was the wrong thing to do, and that other ways and means would have worked better.

But religious zealots will ignore logic and reason, and tend to be violent only to have their side enforced as “it always worked for us”.

The news coming out of there now is heartbreaking.

Our govt is totally out of touch with reality.

They now want to institute a NHI (national healthcare) as well as basic income, and the taxpayer will have to cough up.

Problem is, the taxpayer base is something like 1 taxpayer for 8 freeloaders. Totally unsustainable.

If they implement it, then I will just resign and take my lumps with the bank etc clamouring for their money, I’m not going to slave for a pittance only to be taxed to death.

There is a LOT of blame being flung around now. “How could we have gone from ‘It should be over a year after we leave before there’s any problems’ to ‘Well, that escalated quickly’?” “It’s Biden’s fault.” “It’s Trump’s fault.”

Republicans want to impeach Biden, including invoking the 25th Amendment. “It’s shows he’s incompetent and impaired”, “He made too-rosy statements that didn’t account for reality” or somesuch. The page showing support for being in Afghanistan has been deleted from the Republican National Committee’s website, but they say that’s misleading because they’re in the process of moving content to a new website. As of today, most or all of anything from before 2021 appears to be gone from the GOP.com website. They seem to have been extremely selective in what’s been kept.

Trump’s saying the Taliban knows he wouldn’t have put up with this and this only happened because Biden didn’t follow his plan he had for dealing with this. To me, that’s another of his “I’m your savior” tactics.

Others are putting this squarely back on Trump’s shoulders, saying recognizing the Taliban and giving them legitimacy set this in motion. The Doha agreement in February 2020 is being called “a surrender agreement with the Taliban”, a “weak agreement” that gave them too much and it hurt the Afghan government. Though Trump said he would withdraw troops, he never actually planned to. It was simply a “play” to get Afghanistan’s president to negotiate a power-sharing deal with the Taliban.

I’m going to have to watch that movie Sig mentioned. That seems to be closer to reality and in line with the other things I’ve read or listened to.

I think this is going to go down in the history books as a lesson in going there for the wrong reasons and the sunk cost fallacy. We stayed because of how much we spent before and we had to keep supporting it to get our return on investment (the Afghan government changing to better support the population). The Afghan government didn’t change, so no matter who was the U.S. president, it was always going to be messy when the troops were recalled.

That being said, there are indications that Afghanistan was better off for the U.S. being there. It just never went further to where it really needed to be.

That inherent messiness in withdrawing troops is why no one touched it before. What president wants to be the one to open that can of worms?

In this case, Joe Biden opened the can. It’s not popular, his ratings have taken a big hit (but are still higher than the former guy), and he’s getting the backlash I mentioned before. In terms of how fast the Afghan government collapsed, I think that can be attributed to once the announcements of when NATO troops and U.S. troops would be withdrawn, the Taliban knew they just had to wait a while and they’d be golden.

For his part, Biden’s sticking by his decision. “Here’s what I said in the past. There was an agreement already in place, I made a commitment and we’re going forward with it.” That does involve moving some troops back in while evacuations are under way.

Now, if President Trump had been re-elected and actually planned to withdraw the troops this year, I think it would have turned out the same way. The difference would be he’d be blaming everyone else instead of taking responsibility for it, like he’s done countless times in the past. “I got bad briefings.”, “It’s so-and-so’s fault and they’re fired.”, etc.

Would Democrats then be pushing for an impeachment and/or invoking the 25th Amendment like Republicans are doing for Biden? If so, that would be impeachment #3 for the big DT.